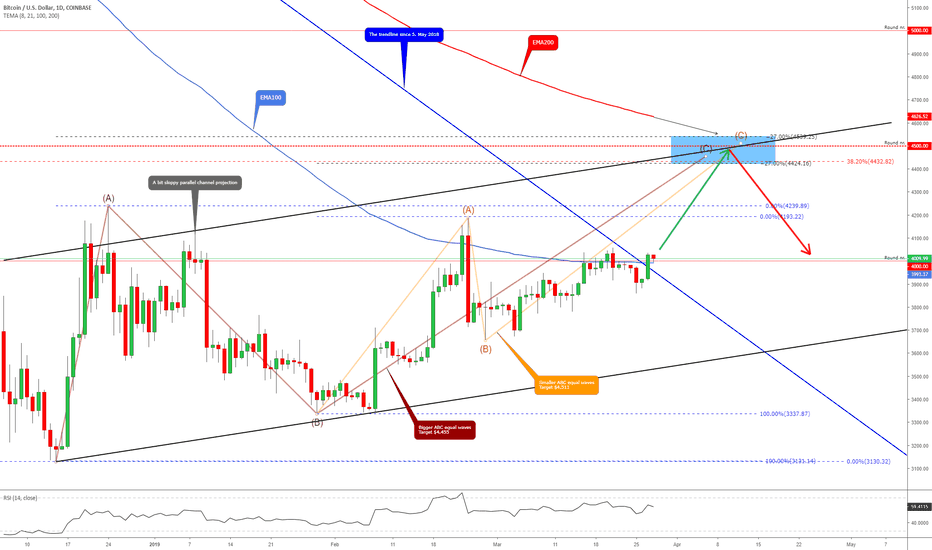 Around 10 days ago I mentioned that the BTC price will go into the $4,500. Today it is again on 'the table' and I will reveal those technical aspects why I think so!

The recent consistency on the Weekly chart is pretty impressive, currently running the sixth week while we may get a green candle. Consistency means that the FOMO (fear of missing out) players might kick in at some point which will help to guide the price higher but okay, let the mid-term technical analysis speaks for itself.

First of all, why I think that this scenario is again on the 'table' is the recent price action, actually, yesterday's candle close which was a bullish candlestick pattern Morning Star:

Two bottoms (15. Dec 2018 and 7. Feb 2018) are formed with Morning Star candlestick patterns, yes, they are not textbook examples but you will understand what I mean.
Secondly, this Morning Star candlestick pattern ends above the historically worked trendline (blue trendline ), it ends up above the round number $4,000, and it got a close above the EMA100!
Now let's count those criteria which will help to guide the price upwards to the blue box which is around $4,500!

The smaller ABC waves (yellowish)
I started to count this pattern from 29. January and it shows also that the C point is again around the $4,500.

So, those were the waves signs which will guide us into the higher levels and if it reaches there then it would be a perfect short area but that's not all...

The major counter-trendline is pulled from the bottom (black trendline ), copy/paste, drag it above the prices and you get a channel. Currently this is a bit sloppy but still, I think we can give here a slight percentage of error variation because of the manipulations and we get also a channel upper trendline projection into this area!

EMA
If the price slowly starts to go upwards then the 200EMA will also start to close the gap between the blue box and we can count this also as a resistance mark which will be a sign to short around the $4,500.


SUMMARY: If this is scenario doesn't work out then hopefully, it was a bit educational to You! ;)

Please, take a second and support my idea post by hitting the "LIKE", it is my only fee from You!
Thank You!

Have a nice day,
Cheers!


*This information is not a recommendation to buy or sell, it is used for educational purposes only!