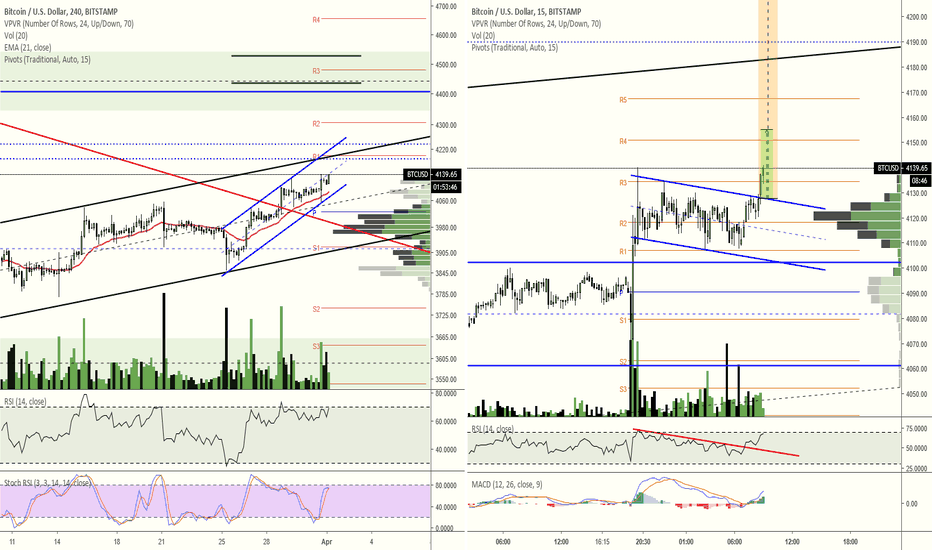 Good morning, traders. Price has continued to grind higher, finding a high of $4139.99 so far, much to the chagrin of the bearish out there. We completed six green weekly candles in a row, the previous high being five during April, and two monthly green candles in a row which hasn't happened at all during this correction. I continue to see an increasing number of really terrible analysis relating to volume . Yes, volume is low, but this is to be necessarily expected as price nears resistance and the apex of a triangle. So there is nothing overtly bearish about volume at this time. Stop listening to people who say "volume is low" or "volume is high." Without context it means absolutely nothing because volume does not live alone on its own little island.

Weekly 21 EMA is around $4250 and, as I've been mentioning for quite a while now, a close above that level should signal a bullish push toward $5000 as it notches a higher high for the first time since the ATH . Failure to surpass that level will likely have price targeting the ascending triangle support at $3600/$3700, depending on how quickly it drops. Weekly Stoch RSI has been topped out for the past month. Weekly RSI isn't bullish yet, though, sitting at 44 so it would make the most sense to see price target that ~$4200 level and then retrace to set up a proper break through that resistance. But trading isn't about what we "think" should happen; it's about what does happen.

As I have warned before, there is the potential for a sudden push above $4250/$4300 to ignite cascading liquidations of the cluster of shorts sitting in that area and resulting in a bit of a short squeeze propelling price upward before a retracement. With that said, the 15 minute TF shows a potential flag printing at this time which would have a target of around $4215, based on the height of the flagpole, if price follows through on a bullish break above $4130. A target of $4155 is based on the height of the descending channel/flag pattern. There are also some gaps on that short TF that lack filling down toward $4000.

The 4H RSI is showing possible bearish divergence and a recent bearish Stoch RSI cross just below overbought, but the time until a reactionary price movement down may be prolonged as the shallower TFs are attempting to flex a bit of muscle. For now, the 1H price continues to find support on the 21 EMA and Stoch RSI is printing a bullish cross just above oversold. The question is, will there be enough demand showing up quick enough to negate that 4H bearish divergence? Most likely not, but we need to be aware that the possibility exists at this time. Interestingly, Bitmex is showing a lot more orderbook supply in relation to demand than Deribit, though they are both perpetual swaps. As such, traders should be careful if attempting to get into a position early based on these orderbooks. Spot orderbooks are showing supply around $4150 and then $4200.

The 3D Stoch RSI has a bit more room before topping out, which also increases the chances of a prolonged move up before retracement. RSI on this TF is bullish at 57 as well. Monthly Stoch RSI remains oversold as it has been since March 2018, however it has been rising since January 2019 suggesting the bottom may very well likely be in. In other words, entering short of long right now is more gambling than trading, depending on your TF, unless of course your are entering long to hold for an extended period of time. There are too many variables at play right now that could keep what it appears "should" happen from happening. I am still long for a push toward that 4H R1 pivot at the top of the ascending black channel. The two dotted blue horizontal lines are the swing highs that we need to see price close above.

Every day, we have a choice to act positively or negatively, so if you get a chance, do something decent for someone today which could be as simple as sharing a nice word with them. You just might change their day, or even their life.

Remember, you can always click on the "share" button in the lower right hand of the screen, under the chart, and then click on "Make it mine" from the popup menu in order to get a live version of the chart that you can explore on your own.
analysis BTCUSD
Resuorce: https://www.tradingview.com
Total visitors count:  24