My Breakdown of What Just Happened and What&#39;s Next! (BTC) 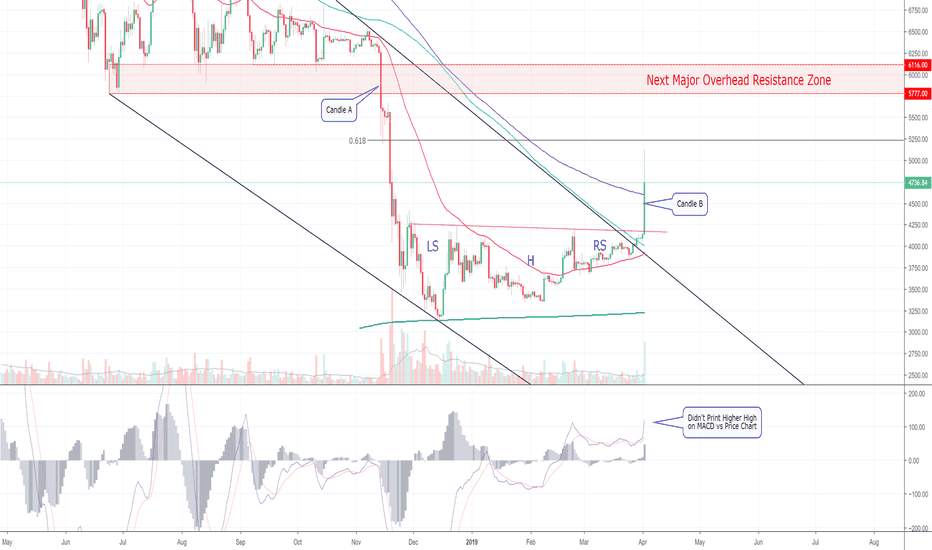 WOW! What a fantastic breakout that was last night! HAHA Welcome friends, to this update analysis on Bitcoin! Let's get it!

Looking at the daily BTC chart, we can see that a breakout happened just as anticipated in the last analysis. Price was able to surpass the upside resistance, and we had a very quick explosion to the upside. A few people have been asking how I knew that the rise would happen so quickly. The answer, is that there is not really any resistance above the pink neckline of the inverted head and shoulders pattern. To be more specific, when price was falling from 6,000, it fell in a very linear way. The market was in freefall. The market showed us, that there was very little support between 6,000ish and 3,000. So, if there is little support during a fall, there will be little resistance on a rise through the same area.

Looking more closely at the price action, we can see that the breakout came on volume that is about four times the average volume , which is a very reassuring thing to see. Additionally, price exploded through the 200 EMA (in purple.) If today's candle closes above the 200 EMA , it will be the first time that has happened since last July. So, price is simply destroying resistance at the moment. We broke above the 50 EMA (in red) and held it like a boss. Remember when I said not to freak out when BTC fell 9% on Feb 24th? Then, we broke out above the falling black trendline , which has acted as resistance since May of 2018. Then, we broke out above the 150 MA (in light blue) which has also been major resistance for months. After that, Bitcoin smashed through the neckline of the inverted head and shoulders pattern, like it didn't even exist. Then, the ultimate resistance destruction came when BTC exploded through the 200 EMA (in purple.)

So, the question now is will price continue up, or will we start to return to the pink neckline of the inverted head and shoulders pattern? To know the answer, we're going to have to see what happens on the next few candles. In my opinion, candle A looks incredibly similar to candle B. In other words, it looks like we are doing the exact opposite of what we did when we fell from 6000. To solidify this theory, we need to see bitcoin consolidate here, just like it did after candle A. If we see some consolidation, I think we will continue higher to the 61.8% retrace, and then to the major overhead resistance at 5777. If we fail to hold above the 200 EMA , and if we don't consolidate here, then I expect price would find support around the pink trendline that it broke out above. Either way, major technical advancements have been made. The future is very bright for Bitcoin .

I'm the master of the charts, the professor, the legend, the king, and I go by the name of Magic! Au revoir.

***This information is not a recommendation to buy or sell. It is to be used for educational purposes only.***